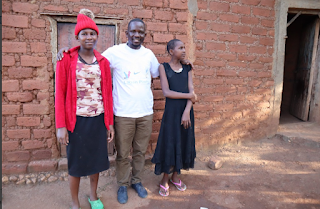 Noah is pictured in the middle.

__
SLOW PROGRESS ON THE COMMUNITY IMPACT CAMPAIGN, NEW IDEAS SPARK
The FirmRock Community Impact campaign to raise enough funds to begin construction of an office and library building in the greater Itoloni region, on land donated by Mr. Philip of FirmRock is slow goings as of March 12. You may visit the campaign at GoFundMe.

FirmRock's U.S. based arts and press team are actively working to find ways around this slow change in funding goal development.

To show support, the art department of FirmRock, created by Star City Arts Virginia, U.S.A. artist and philanthropist Suzy Nees, has created artwork and seasonal gifts for the community support of FirmRock CBO. See some of this artwork below. 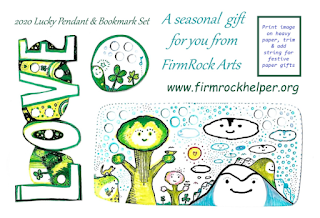 Voice of America__This week, Voice of America followed Maasai rangers into the field to track an elephant. The well-being of Kenya's wildlife is incredibly important to the Kenyan ecosystem and thus the food of animals and people.

These women have earned the respect of their male colleagues in the park services. FirmRock Farm Review is drawing attention to the story to give hope to their own student girls, who believe that they can do anything.

Coronavirus impact on Kenya's economy_
Kenyan economist Tony Watima warns a Global recession is definitely coming because of the market response to the coronavirus. Watima warns that too many countries, including Kenya, are heavily dependent on the Chinese economy.

Kenya is considering digital and decentralized programs. Kenya states that the country should not just be grateful that they have not yet had a reported case of COVID-19 as of March 12. It is best to "cushion" human resources.

Note: It is advisable to assume a risk of COVID-19 even in unaffected areas. Follow The New African Living Standard to receive continued updates regarding prevention measures you can take to limit the spread of the disease. Follow #thenewafricanlivingstandard for more.

A street boy covers an Ed Sheeran song perfectly
Tuko/Tuco TV Kenya shared this cover of Perfect by Ed Sheeran performed by George. George is a 22-year-old who has been homeless in Kenya for the past 14 years. His talent, however, has opened great doors for him.
Comments stated that George frequents local cybers studying and listening to music online. His life revolves around music.
FirmRock Farm Review has hopes for men such as George. Young youths who are sponsored by programs such as FirmRock Children's Helper will grow up to take strong initiatives in their communities to end poverty such as that George lives in. So that young men such as George can gain a greater footing in their economics and go on to record music that the whole world can enjoy.

SECOND INVASION OF LOCUSTS COMES TO MARSABIT
An area ravaged by floods in late 2019 is now the birthplace of the second invasion of locusts. These locusts have invaded Marsabit. Even while the government actively works to control the outbreak, the funding is "inadequate" and the resources are spread too thin.

Cabinet Secretary Munya stated that the declaration of a national emergency brings negative "vibes" to the situation and he does not understand why it needed to go there. Munya states that the agricultural ministry is handling the problem.

This was reported by NTV within the last 24 hours.